The Tactacam EZ Aim Mount with an extended arm and 360 swivel head. Compatible with trail cameras and all 1/4″ x 20 mounts. Durable Powder Coated Steel collapses for transporting Versatile, mounts in various angles for desired field of view Super sharp screw that makes it easy to screw into trees.

Let customers speak for us

Awesome watch! Surprisingly intuitive to use. Tactical Sports Gear is very responsive and helpful. A+

The M frame family is my favorite. I was very hesitant about purchasing these because the price is so low. It's cheaper than just a set of them by themselves.
But they are real Oakleys and they come in a really great case where you can carry both the lenses with you. They're fully backed by Oakley and this was such an amazing purchase

The shipment was quick and easy. Customer service was via email, I received a response and resolution. These were a gift for my father, he enjoys them, and the quality is great.

I’m a G-Shock, nut. The Rangeman is big, but not that big. I have a seven inch wrist and it’s no problem. But if you like a smaller watch, obviously this isn’t for you. The display is hard to read but not so hard that's unusable. If you want that cool blacked out look you’re just going to have to deal with that. If you want maximum practicality get the positive display.

The only feature I would add is the ability to set timers by the second, and not just by the minute. The shortest timer you can set is one minute.

Otherwise, there’s really nothing wrong with this watch. It will be hard to read the details of finer information such as the barometer graph, but you can do it. The Barometer Alarm also works very well.

The altimeter is just okay, compared to my phone I think it's within 100 feet, so enough to get you the general idea of alt/elevation. Just don't land a plane with it, you probably will die, ha!

This watch is a little expensive for what you get, as there are more feature rich G-Shocks for the same price, but this is one of their iconic models so they’re charging a premium. 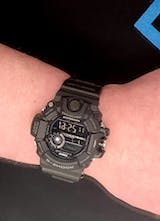 The light is awesome!! I work for a towing company and this light does everything I need it to do, from road side assistance down dark roads to taking cars to dark lots with no lighting.